Arctic Tern was a Virginia-bred Thoroughbred racehorse, born at the Keswick Stables in 1973. 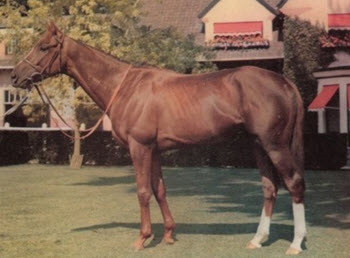 After being trained in France by John Fellows, Arctic Tern competed at the highest level in Europe for three seasons, winning four out of twenty one races. He won the Prix Thomas Bryong in 1975, the Prix de Fontainbleau in 1976 and the Prix Ganay in 1977. In most of his races he was ridden by Maurice Philipperon.

After his racing career was over, Arctic Tern became a breeding stallion. His most famous progeny is Bering, who won the Prix du Jockey Club in 1986.

Arctic Tern was bred in Virgina by his owner Mrs John S. Knight’s Keswick Stables. Born in 1973, he was a chestnut colored horse with four white socks and a white blaze. He was blind in his right eye, but this rarely caused him any problems on or off the track.

Arctic Tern was from the last American crop of foals sired by the famous Sea-Bird stallion. Sea-Bird (also known as Sea Bird) won both the Prix de l’Arc de Triomphe and The Derby (Epsom Derby) in 1965, and was the sire of illustrious horses such as the Arc winning Allez France and the Champion Hurdler Sea Pigeon. Sea-Bird died in France in 1973, the same year as Arctic Tern was born.

Bubbling Beauty, Arctic Tern’s dam, was neither a good racehorse nor a renowned broodmare – except for her success with Arctic Tern. She did however belong to a superb family of horses, and was for instance the half-sister to the dams that foaled Northern Dancer and Halo.

Arctic Tern’s very first race was a 1200 meter one at the Deauvulle Racecourse, a race for previously unraced horses only. In this contest, he came in second – just one head after the winner No Turning.

Arctic Tern finished second in this race too, after being beaten by half a length by Actopan. In this maiden race over 1400 meters, Arctic Tern was leading until he swerved badly across the course in the last 200 meters. This swerving might have been the result of his right eye blindness.

In this third race, Arctic Tern finally scored a victory, and he did it with a good margin, four lengths in front of the runner-up. This was a maiden race over 1300 meters.

For the 1550 meter Prix Thomas Bryon, Arctic Tern was moved up in class and distance. With Maurice Philipperon as his rider, Arctic Tern started at odds of 6.1/1.

Philipperon elected to restrain Arctic Tern in the initial stages of the race, before moving up in the straight and take the lead 200 meters from the Finnish. Arctic Tern won the race with a two length margin to Comeram.

On April 4, 1976, Arctic Tern won the 1600 metre Prix de Fontainbleau. The distance between him and the runner-up Roan Star was three quarters of a length. This was Arctic Tern’s very first performance as a three-year-old.

No wins in eight races, but runner-up in two

Arctic Tern didn’t win any of his other eight races of the season, but placed second in two of them.

Arctic Tern’s first race as a four-year-old was the Prix d’Harcourt over 2000 meters at Longchamp in April, where he finished third. (Kasteel won, followed by Full of Hope.)

Three weeks after Prix d’Harcourt, Arctic Tern started 5/1 second favorite for the Group One Prix Ganay over 2100 meters at the same racecourse.

Halfway up the straight, Arctic Tern accelerated, and he eventually won the race with a margin of half a length to runner-up Exceller.

After his victory in the Group One Prix Ganay, Arctic Tern was a favorite for the Prix Dollar, but finished second after being beaten with three quarters of a length by Trepan.

For the first time ever in his racing career, Arctic Tern was sent over to England where he was to participate in the Eclipse Stakes over ten furlongs at Sandown Park, a racecourse located in the outskirts of London.

Either traveling or England didn’t agree well with Arctic Tern. Before the start, he was acting nervous and reluctant in the paddock, and he had to be led onto the racecourse before the jockey could finally mount him. Unsurprisingly, the horse got a poor start and found himself at the rear of the field for most of the race. He did make some substantial progress in the straight, but not enough to capture a victory. Arctic Tern finished a distant third in the Eclipse Stakes, behind Artaius and Lucky Wednesday.

After the trip to England, Arctic Tern was allowed to rest for two and a half month, and his next race was held at the familiar Longchamp racecourse in France. Still, he only finished fourth of six runners in the Prix Foy over 2400 meters in September.

In October, Arctic Tern was given a new chance to win the Arc de Triomphe, and this time he was wearing blinkers. It didn’t go well, and he finished as the second-last of the 26 participants.

In late October, Arctic Tern travelled to England again, this time to compete in the Champion Stakes over ten furlongs at Newmarket Racecourse. Newmarket is generally regarded at the capital of British horse racing, with the first recorded race taking place here as early as 1622. The racecourse itself was built in 1636.

During this visit to England, Arctic Tern seemed to be in a much better mood than the previous time. By the last quarter mile of the race he took clear advantage, and many viewers probably pegged him as the most likely winner. Regrettably, Arctic Tern weakened in the closing stages and eventually ended up fourth in the race. (Flying Water won.)

After his defeat in England, Arctic Tern was transported to the United States to participate in the first-ever instance of the Turf Classic at Aqueduct Racetack in Queen, New York City. He didn’t place in the race, and this was to become his very last contest ever. He was sent back to France where he commenced work as a breeding stallion.

For 1975, there was no International Classification of European two-year-olds. Instead, official handicappers of Britain, Ireland and France published separate rankings. The Timeform organisation rated Arctic Tern 125, which was 5 pounds behind the top-rated juvenile Manado. In France, Arctic Tern was sixth-best colt of the year.

After his racing career was over, Arctic Tern became a breeding stallion at Alec Head’s Haras du Quesnay in Normandy, France. There, he sired the fillies Harbour and Escaline, who won the Prix de Diane in 1982 and 1983, respectively.

In 1983, Arctic Tern was exported to Kentucky, USA, where he stood as the Lane’s End Farm.

In France, he sired Bering who went on to win the Prix du Jockey Club and eventually became the sire of Pennekamp. In 1986, Arctic Tern was the leading sire in France.

Another example of a horse sired by Arctic Tern is Glacial Storm, a horse that placed second in The Derby (Epsom Derby).